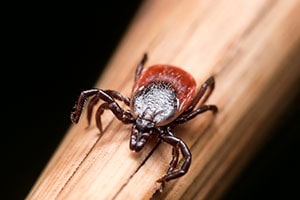 Ticks become increasingly common in the summertime, and you must protect your children from them. They are carriers of many diseases, most notably Lyme. Before you can learn how to prevent and treat tick bites, you must know what exactly ticks are.

Ticks are tiny arachnids, not insects, which are about the size of a poppy seed or a black pepper fleck. Unlike many insects, they do not fly or jump. Instead, they wait for a human or animal to get close, then they extend their arms towards them. Ticks are known to feed on the blood of various different mammals, birds, and reptiles. There are several hundred varieties of ticks, but only a few bite humans. They include blacklegged ticks, commonly known as deer ticks, Rocky Mountain wood ticks, American dog ticks, and brown dog ticks.

How to Prevent Tick Exposure

Before your child goes outdoors, know where you are most likely to find ticks. They are usually found in grassy or wooded areas. While they are outside, your child should avoid shaded areas where ticks congregate. Ticks cannot survive in low humidity for more than several hours. Instead, they are prevalent in leaf piles found in shady, humid environments.

Wearing the right clothes is very important to protecting your child from ticks while they are playing outside. Your child can avoid skin exposure to ticks by wearing pants, long-sleeve shirts, socks, and closed-toed shoes. They should also tuck their pants into their socks to prevent ticks from getting under your child's clothes. Wearing light colored clothing when outside enables your child to spot ticks more easily.

While ticks are not insects, insect repellents are still effective in preventing exposure. You can apply permethrin-containing repellent on clothing such as pants and boots to repel ticks. In addition, you can also purchase clothing already containing permethrin to save you and your child the hassle of applying it on clothes. Applying repellent containing at least 20 percent DEET on your child's skin can be effective as well.

You can also use pesticides around your backyard to reduce the number of ticks. However, before using one, check with local authorities on any regulations pertaining to pesticide application on residential properties in your area. Be informed on what pesticides you are allowed to use. You should also know what hours of the day you are permitted to use them. Make sure that you are using the most effective, yet safest, pesticide for your backyard.

Do not rely on pesticides alone to reduce the number of ticks in your yard. Make sure to conduct landscaping work that can prevent further tick activity. Remove leaf litter, as ticks can be commonly found on leaves. Mowing your lawn frequently also helps reduce ticks because they commonly attach themselves to tall grass. Construct fences to prevent larger animals such as wolves, deer, and raccoons all of which can carry ticks. Keep playground equipment away from away from trees as it reduces exposure to ticks. You can also place a three foot barrier made of wood chips around the yard. Wood chips help restrict further tick migration into your yard by drying them out.

After your child comes indoors, check them for ticks. You must especially look around every single part of their body especially their underarms, ear canals, belly button, scalp, and groin. Have them shower to wash off any potential ticks, and make sure to account for some that may have crawled under your child's clothes. Put your child's clothes in the dryer for ten minutes on high heat to kill any ticks that might have clung onto their clothing.

Should a tick get on your child's skin, use tweezers to grasp it as close to the skin as possible. Pull upward, with even pressure. Twisting or jerking the tick can cause parts of its mouth to break off and remain on skin. If this happens, remove with tweezers. Make sure to do this immediately after seeing a tick on your child's skin. The longer a tick is attached on your child, the more likely they will be exposed to tick-borne bacteria. Unlike a mosquito, ticks will stay on humans for up to three days. A female tick can lay her eggs on skin within that time frame. After removal, sanitize the bite area with either rubbing alcohol or soap and water. Do not use your fingers to crush a tick. If your child receives a rash, seek a medical professional immediately.

Lyme disease is the most common illness you and your child can get from tick bites. It accounts for over eighty percent of tick-borne diseases. Lyme disease is caused by the Borrelia bacteria. Many cases are found in the New England, Mid-Atlantic, and Upper Midwest regions of the United States. However, Lyme disease-carrying ticks can still be found throughout the rest of the country.

An early sign of infection is the expanding area of redness on the skin. It can resemble a "bull's eye." A Lyme rash can also be raised or flat. It may also be warm as well. However, it is neither itchy nor painful. The rash can also take up to thirty days for it to appear as well. A rash may not even show up at all. Other symptoms include fever, headache, or fatigue. Weak muscles can also result as well. If left untreated, one can receive partial facial paralysis, meningitis, or heart palpitations. While easily treatable, Lyme disease is not something you would want your child to get in the first place.

There are measures you can take if your child gets Lyme disease from a tick bite. Always see a doctor immediately upon viewing possible signs of Lyme. A doctor will likely prescribe antibiotics such as doxycycline, amoxicillin, or cefuroxime. Each of them can treat Lyme disease within two to four weeks.

Make sure to treat Lyme disease as soon as possible. While later stages of Lyme are treatable, some people can suffer long-term damage to their nervous system and joints if they wait. These symptoms can last more than six months, even after the disease has been treated. While they will eventually go away on their own, antibiotics will not hasten recovery.

Lyme disease, despite being the most prevalent tick borne illness, should not be the only one you should be concerned with. Anaplasmosis, spread by deer ticks, and ehrlichiosis, spread by lone star ticks, are related infections that both cause fever, headache, muscle pain, nausea, and stomach pain. Rashes are rarely associated with both. They are the two of most common tick-borne diseases in the United States after Lyme. A third disease is Rocky Mountain spotted fever (RMSF) which is transmitted by the American dog tick. It has similar symptoms to Lyme including a rash, nausea, fever, and muscle pain. Unlike Lyme, however, RMSF can be life-threatening if left untreated.

Your beloved canine can be exposed to ticks while playing outside. Ticks can cling on to your dogs, and can eventually find their way towards you and your children. Always check your dogs for ticks every day, especially after taking them outside. If you find a tick on your dog, remove it immediately.

While it is difficult to treat dogs for ticks, you can keep the tick amount under control through tick control products such as topical solutions, chewable tablets, and tick collars. Topical solutions such as Frontline repel both fleas and ticks from dogs by applying it directly on your dog.

Chewable tablets such as Bravecto kill fleas and ticks by reaching tissue fluids under your dog's skin. Tick collars prevent ticks from attaching on your dog by secreting chemicals that get released into your dog's skin. Before purchasing any of these items, make sure to first consult your veterinarian for the most effective, yet safest, products for your dog.