How to Avoid Insect Bites

During warm months of the year, being bitten by an insect becomes increasingly likely. While most bites are harmless, not all are. Many different kinds of insects such as mosquitoes, ticks, and flies carry various diseases. This makes it very important to minimize your child's exposure to insects while they are playing outside.

Applying insect repellent is one of the best ways to do so. However, not all repellents are created equal. Choosing the right repellent for your child means being informed on the varying ingredients found in different repellents. You have to consider potential health side effects, in addition to repel effectiveness. Most include synthetic chemicals such as DEET, Picaridin, and permethrin. By contrast, some include naturally occurring ingredients extracted from different plants such as citronella, lemongrass, and lavender.

DEET, or diethyltoluamide, is prevalent in many repellent brands, most notably OFF! Its odor is offensive to insects. It can last from two to five hours depending on the percentage, which usually ranges around 10% to 30%. Higher concentrations do not improve repellent effectiveness. In addition, sunscreen containing DEET can degrade the sun protection factor (SPF). Make sure to wash off products containing DEET once your child goes indoors. While DEET is highly effective, side effects may occur. They include respiratory problems, burning eyes, headaches, skin rashes, seizures, or nausea. Ingestion of large amounts of DEET can also be fatal.

Another synthetic ingredient is Picardin, modeled after a compound found in black pepper plants. Compared to DEET, it is odorless. Picardin can last between three to eight hours depending on the amount applied. Sawyer Fisherman's Formula is the most common known Picardin-based insect repellents. While considered safer than DEET, no studies have been conducted to observe Picardin's long-term effects. People with sensitive skin may experience mild irritation.

A third synthetic chemical is permethrin, sold under the brand name Nix, which effectively kills ticks. It is used on mosquito nets, personal clothing, and military uniforms. Upon application on clothing, it can last several washings. Permethrin can be used on sleeping bags or tents. While also used for flea treatment on dogs, it is toxic to cats. Unlike DEET and Picaridin, do not apply it directly on your child's skin. 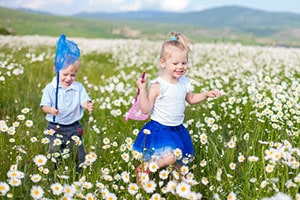 Citronella is a very common natural insect repellent that is extracted from two species of grass. While considered effective as DEET, the various oils comprising Citronella are prone to evaporating, which degrades its efficacy. It also only protects from mosquitoes for only two hours. It can also irritate sensitive skin and eyes, despite having fewer side effects than DEET or permethrin.

Other essential oils such as soybean, lemongrass, and lavender are used as repellent. However, there have been little to no data that shows their effectiveness. In spite of this, essential oils are to have thought to last between 30 minutes to over two hours of effectiveness.

While each ingredient may have different instructions, use caution when applying any repellent on your child. Always follow each and every instruction on the label. Spray repellents in open areas, to prevent involuntary inhalation. Use only enough repellent to cover one's clothing or exposed skin. Do not apply repellent on infants under two months. Never apply repellent on cuts, wounds, or irritated skin. Do not spray directly on your child's face. Instead, spray directly on your hands, then rub. Use lotion, which has milder effects on the skin than spray.

If you think your child is experiencing adverse reactions to a repellent, stop use immediately and wash your child's skin with soap and water. If your child gets insect repellent on their eyes or accidentally ingests it, please call the Maryland Poison Center immediately at 1-800-222-1222. Safety first is crucial, because of the potential toxicity of some insect repellent can be fatal such as DEET.

You can also take by taking steps to avoid exposure to insects without repellent. Avoid areas that attract insects such as trash cans, stagnant water, and marshy areas. Make sure to wear long pants and closed-toed shoes when around insects. Tucking in your child's shirt can help minimize skin exposure as well. Avoid bright colors or flowery printed clothing, both of which insects are attracted to. Do not use scented soaps, perfumes, or hairspray smells attract insects. Ensure that walls, windows, and doors are well sealed. If possible, you can use a mosquito net to shield you and your children from mosquitoes. You can also use a fan to help ward off mosquitoes. Yellow bug lights can also deter mosquitoes in the evening hours. While these alternatives may not directly repel mosquitoes, there are fewer health effects than using repellent.

What Should You Do?

Deciding on the right insect repellent for your child can difficult because of the varying efficacy and side effects among them. Synthetic ingredients DEET and Picardin have proven to be effective at repelling insects. However, the trade-off is that there are potential side effects. By contrast, natural ingredients have fewer side effects, but are not as effective in repelling insects. You can also find alternatives such as using a mosquito net or wearing long pants and closed shoes. The best thing you can do is use insect repellent in combination with these alternatives and you should talk to your pediatrician about your options. Use common sense, too. For example, one insect repellent is long pants and a long sleeve shirt.