Protect Your Child From Bullying 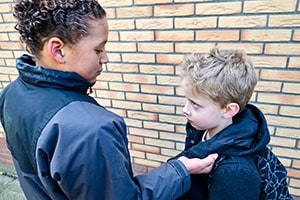 Whether inside or outside of school, your child might experience bullying. A 2015 National Center for Education Statistics survey reported that about 21 percent of students ages 12-18 were bullied during the school year. Compared to high school aged-children, 31 percent of 6th-graders reported being bullied at school. You must take bullying very seriously, especially when your child reaches adolescence.

Bullying is aggressive, unwanted behavior that implies a power imbalance between children. It is not something that occurs once. Do not conflate any kind of mean-spirited behavior with bullying. These kind of behaviors should be taken seriously, but you should respond different to them compared to bullying. Bullying is a repeated behavior that one inflicts upon the same people over and over. The aims of bullying are to physically or mentally harm its victims to inflict psychological damage.

Who are "Bullies," and Why do They do it?

Anyone can be a bully. It does not require a child to be of a certain size, race, age, or gender. However, children who bully usually have higher social or physical status than their targets. They also struggle with empathy and have underlying insecurities. Bullies disproportionally have strained relationships with their parents and peers. They pick on fearful and insecure children, who they find to be easy targets.

There are three ways children bully other children, which are physical, mental, and social. While each are different, their goals are very similar. All three attempt to damage the self-esteem of the bullied, while raising the bully's.

Verbal bullying is less straightforward because it consists of verbal abuse. This includes verbal threats whether it involves physical harm or not. Taunting is another form, which is meant to provoke a negative response in bullied individuals such as anger or sadness. It can also come in the form of name calling. Much verbal bullying consists of using racist, homophobic, and transphobic epithets that attempt to shame a child for having a different identity.

Where can Bullying Occur?

What we are learning is that bullying can occur anywhere. While much reported bullying happens in school buildings, they can occur in other places such as the playground or the bus. It can also happen anywhere outside of a school-related facility, or even on the Internet. Cyberbulling is a big problem that gets little attention. Kids lose their inhibitions online. What happens? They get more cruel.

What can Happen to Bullied Children?

It is easy to dismiss bulling at something we all had to deal with when we were kids. But the long-term effects of bullying on children can result in negative outcomes for their mental health. Bullied children are more likely to have anxiety and depression. They are also likely to resort to harmful coping mechanisms such as heavy substance use. Some children have committed suicide as a result of being bullied. This makes it important for your child to overcome bullying, as it can negatively affect their future.

How Should I Discuss Bullying With my Kids?

As a parent, you must take steps to minimize bullying whether your child is being bullied or bullying themselves. The most important thing you can do for your child is to talk to them about bullying in general. Discuss it with them in a friendly, yet informative, tone that enables them become comfortable with speaking to you about it. Do not directly ask them if they are being bullied or bullying. By speaking about bullying in general, your child will be more receptive towards giving their perspective. Asking them about their own experiences directly at first will make them feel uncomfortable because they are forced to confront something they may not feel comfortable with sharing.

How can I Help my Child Deal With Bullies?

Unfortunately, your child will likely deal with a bully at least once in their life. They must know what to do when approached by one. You and your child should practice scenarios where your child might face bullying. This will allow them to think about potential courses of action.

While it may be tempting to fight back, discourage them from doing so. It can lead to serious injuries, and your child could get in trouble instead. They can take several courses of action that do not involve violence. Have your child try to avoid bullies as much as they can. For example, they should use a different bathroom if a bully is nearby. You should also encourage your child to not display angry or upset feelings to their bully. Bullies thrive on negative emotions, making this very important. Instead, encourage them to ignore bullies either by seeming bored or texting someone on their phone. Eventually, the bully will get bored and leave your child alone.

Your child should tell authority figures such as you, their teachers, their guidance counselor, and other school staff about bullying. They could offer some advice on how to deal with their situation. While they may not completely fix it, they can assure your child that someone is willing to help them out.

What if my Child is a Bully?

Sometimes good kids also engage in bullying behavior. You must use extra caution if your child happens to bully others because it can be an indicator of overall issues they may have in their life. Your child might be frustrated, stressed, or depressed. If their negative emotions are not channeled correctly, they might take it out on others. Your child may want to feel better, and unfortunately, bully behavior can raise their self esteem, yet in a negative way. You should look for warning signs that your child might be exhibiting bullying behavior. It could be. Do not directly ask your child why they are bullying other children. Instead, ask them what is going on their life.

The longer answer and sometimes the path less travelled is that you have to foster an environment that does not encourage bully behavior. Do not resort to name-calling, put down, or physical force in your household. Doing this behavior yourself signals to your child that it is okay for them to do these actions themselves. Instead, cultivate a loving, caring environment that allows your child to have a high-self esteem, while encouraging them to respect others. Let them know that you love them, and that you will always be there for them. Lead by example by being respectful to others, so your child can imitate those behaviors instead.

How can I help stop bullying in schools?

Many states have anti-bullying laws that usually require schools to report cases of bullying to the state, who will evaluate each school by their bullying policies and incidents. Know your state's anti-bullying laws, so you and your child can take appropriate courses of action such as reporting incidents to their school. Many states list various groups that are protected under anti-bullying laws such as race, national origin, sex, sexual orientation, gender identity, and socioeconomic status. Depending on the case, bullying can be a civil rights violation as well.

How can I Deal With Cyberbullying?

Thanks to the internet, bullying does not have to involve direct person to person interaction. Cyberbullying takes place over cell phones, computers, and tablets. It can happen over instant messenger, social media, and apps. It is distinct from other forms of bullying because it can happen from anywhere at any time. Cyberbullying can occur anonymously, which can make identifying your child's bully difficult.

With respect to cyberbullying, set boundaries with your child's technology use. Teach your children to ignore threatening emails or messages. Add your child as a friend on Facebook, Instagram, Twitter, or Snapchat. The only computer your child should have access to is the family computer. It should also be in public place at home, where your child's activity can be monitored. Think twice about possibly getting a smartphone for your child's first cell phone, as they could use it to cyberbully or be cyberbullied themselves. Monitor their text messages or cell phone use as much as you can. You can also restrict your child's cell phone use so that they are only allowed to call and text you.