If you are having an honest talk about child safety, you have to talk about guns. The second leading cause of death among children in this country gun-related injuries, coming in behind motor-vehicle crashes. Every year, nearly 1,700 children and teens die by gunfire.

You can Make a Difference for Your Child

This article is about child safety. It is for people that want to best protect their children. It has nothing to do with your views on the Second Amendment. The country is currently split on guns. This debate will take place elsewhere. We can all agree that gun-related deaths and injuries are a significant public health problem in this country. Guns in your home – and the homes of your children’s friends -- pose a clear danger to your children. You can be a big fan of the Second Amendment and still advocate for the safety of children.

There is also a kneejerk reaction from people on both sides of the Second Amendment debate that our gun problem is just too massive to even get our arms around. It is true that criminals are going to get their hands on guns and undermine the best intentions of lawmakers looking to protect our children, no matter how well-intentioned and consistent with our values that it might be. This is also dead wrong. There is so much more we can do to protect our children if we just come together, accept each other’s political differences, and focus on saving the lives that we can save.

Which Guns Pose the Biggest Threat?

We are saying guns. More specifically, the risk to children is largely handguns. Statistics tell us that handguns are far more lethal to our children than other types of guns. Most families who have a gun own a shotgun or a rifle. We can debate the safety of these. But we know that handguns pose a far greater risk to children, in terms of accidents and in intentional harm to ourselves and others.

We are often told that the key to gun safety is people that know how to use handguns. The NRA does a great job of training tens of thousands of certified gun safety instructors. No one can argue the NRA is not fighting for gun safety. But the statistics do not lie. When it comes to protecting children, the risk associated with handguns cannot be overcome by even the best gun safety instruction. 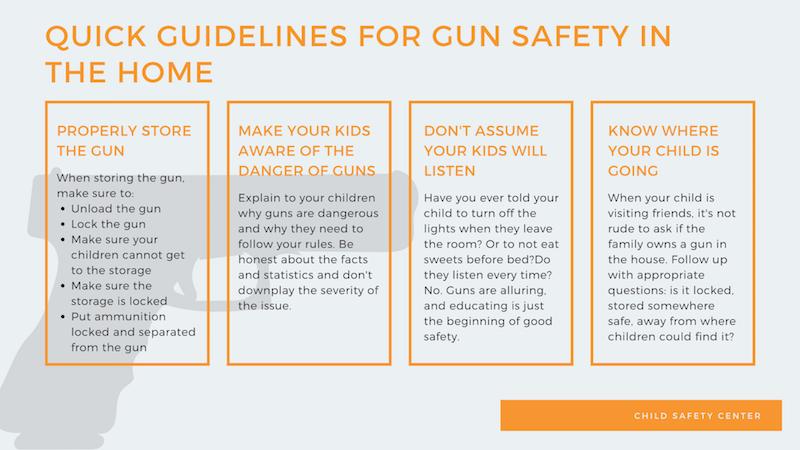 What Should You do if You Have a Gun in the House?

If you must have a gun in the house, you have to accept that it puts your children at risk of death and injury from that gun. Can you argue that the risk is worth it because you are keeping your family safe from bad guys? You can. But you must own the risk. So, here is what you can do.

How do I Protect my Kids From Guns in Other Homes?

The first thing you can do is make sure your children are visiting friends from stable and loving households, because violent households are more likely to suffer from gun violence. For many reasons including and beyond the gun safety risk, this is not a suitable place for your children.

Know where your children are going. Do they have a swimming pool? Are the parents on the sexual predator registry? And do they have a gun? Parents often think they would know who might have a gun. They don’t. It’s been shown that nearly half of all U.S. adults live in a gun household.

Parents often assume the child’s friend does not have a gun. Is it awkward and embarrassing to ask these kinds of questions about gun ownership and safety? It is. But most of us would rather suffer through a little embarrassment that to risk having our child get shot.