Let's talk about bullying. We are all aware that bullying is a problem, right? Bullying has been happening ever since schools for children were established, and unfortunately, it doesn't seem to get any better with time. Statistics tell us that bullying is continuing to be a serious problem in the education system, with 20 percent of students ages 12 to 18 reporting having been bullied before, and another 70 percent admitting having witnessed bullying in school.

It's safe to say bullying is a problem that needs more attention and action, but many people still underestimate the impact bullying can have on children's mental health. We are here to tell you that bullying is not something to take lightly. Bullying can and has caused children to take their own life. No child should have to “suck it up”, “get over it”, or “be a man” when it comes to being harassed by their peers. If your child is being bullied or is a bully themselves, you need to address the problem immediately. Below we have provided a detailed fact sheet about bullying.

Bullying is aggressive, abusive behavior that school aged children repeatedly inflict upon their peers. It also involves a power imbalance between the two individuals. This imbalance can come in forms that include physical size, popularity, and knowledge of embarrassing information, among other things.

What Forms of Bullying are There? 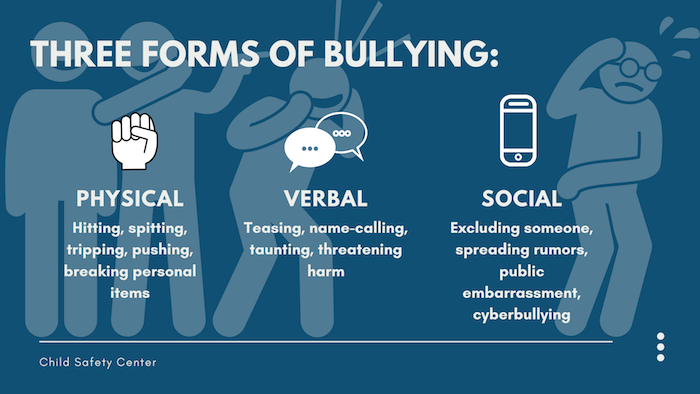 Examples of physical bullying include:

Examples of verbal bullying include:

Examples of social bullying include:

Who is at Risk of Being Bullied?

Bullied children tend to be alienated from their peers and can experience severe mental health issues. Unfortunately, these characteristics make them easy targets for bullies. Signs that your child might be vulnerable to bullying include:

Who is Most Likely to be a Bully?

Children who are likely to be bullies have characteristics that indicate aggressive behavior. Bullies may also experience personal issues in their own life, and their bullying is a way for them to act out. These characteristics include, but are not limited to:

Where Does Bullying Take Place?

Bullying can take place before, during, or after school hours. While frequently reported on school grounds, it can also happen on the bus or outside of school, including online. According to a Johns Hopkins study, over 29 percent of bullying took place in the classroom, 29 percent in hallways or lockers, around 23 percent in the cafeteria, around 20 percent in gym class, around 12 percent in the bathroom, and 6.2 percent on the playground.

What Statistics are There on Bullying?

Being bullied is not uncommon for children to experience. Statistics indicate that around 1 in 5 children reported being bullying. Here's some quick facts:

Bullying others is also not uncommon:

Frequency of being bullied:

What are Signs That my Child is Experiencing Bullying?

Changes, either physical or behavioral, in your child may indicate that they are being bullied. However, some bullied children may not show any warning signs. Some children are good at hiding their problems away from their parents, often due to embarrassment or shame.

These signs generally include:

What are Signs That my Child Might be Bullying Their Peers?

There are possible warning signs that may indicate that your child is bullying others:

What Kind of Impact Does Bullying Have on Children?

Children who are bullied experience negative impacts to their physical and mental health. They may experience depression, anxiety, or other mood or mental health problems. Their eating patterns may be affected, either by eating too much or too little. A bullied child may also lose interest in activities they generally enjoyed. Being bullied can also have an adverse impact on their schoolwork.

Unfortunately, there have been too many stories of children and teens taking their own lives due to the pressure caused by bullying and harassment. Bullying also tends to have a permanent impact on a child as they grow. The problems that developed due to being bullied can linger as a child grows older and can cause them to have ongoing issues with their self-esteem and self-worth. This type of harassment on children is no joke, it can easily turn into a life or death situation.

How can I Prevent Bullying?

There are several measures you can take to prevent bullying from happening. They involve speaking to your child and being directly involved in their lives. These measures include:

What if my Child Experiences Bullying? How Should I Respond?

There are measures you can take if your child experiences bullying:

How can I respond to bullying on the spot?

Bullying does not have to take place in person, it can happen through the computer or your child's phones. This is known as “cyberbullying.” It can occur through texts, email, or social media such as Facebook or Instagram. Bullies can send harassing and threatening messages through these platforms. They may even share or post mean, untrue, embarrassing, and private statements about others. If you would like to read more about cyberbullying, we provide a comprehensive guide on it.

The biggest thing to take away from this article is that bullying is a serious matter that can have devastating consequences and long-lasting emotional effects. If your child is being bullied or you know your child is acting like a bully, the situation needs to be addressed immediately before someone ends up getting really hurt. Bullying can escalate to a dangerous problem faster than you think, and most importantly, no child deserves to suffer from being harassed by their peers.