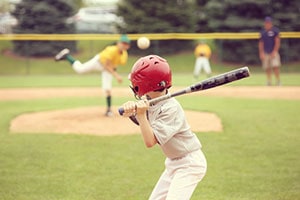 But “each year, more than 125,000 baseball and softball players under age 15 are injured badly enough to seek treatment in hospital emergency departments.” Many of these injuries could have been avoided by following a few simple safety rules. Following these rules will help keep your child safe while they play the great American pastime.

Know the dangers of and consider banning aluminum bats. Baseballs hit with aluminum bats travel five to twenty mph faster than those hit with wooden bats. Aluminum bats have a larger “sweet spot,” and their hollow nature creates a “trampoline effect.” That effect is “the bouncing back of the baseball off an aluminum bat. It occurs during and after the collision of the ball and bat, and results in the ball springing off the bat.”

Because of their proximity to the hitter, pitchers have the greatest risk of being hit by a batted ball. Aluminum bats increase that risk. A pitcher needs at least .39 seconds to react to a batted ball. But balls hit with aluminum bats frequently travel faster than 100 mph, which does not allow enough time for a pitcher to react:

The Average Available Pitcher Reaction Time (APRT) of a ball traveling at 93 mph takes 0.4 seconds to travel 54 feet. The pitcher’s mound is exactly 60 feet, 6 inches away from home plate. Now with speeds of 100 mph plus the pitcher only has less than 0.030 seconds to react to a come-backer, which is impossible.

In 2011, the Montana Supreme Court upheld an $850,000 judgment against bat manufacturer Louisville Slugger. Eighteen year old pitcher Brandon Patch died after being hit in the temple by a ball hit with an aluminum bat manufactured by the defendant. The court ruled that the defendant did not provide adequate warnings about the dangers of using the bat. In 2002, a California Court of Appeal cited expert testimony that a ball hit with an aluminum bat made by the defendant was traveling faster than 100 mph, meaning that the plaintiff did not have enough time to react. The court therefore reversed the trial court ruling dismissing the lawsuit, and remanded the case for trial.

In 2006, a 12 year old pitcher was hit in the chest by a ball hit with an aluminum bat. He went into cardiac arrest and stopped breathing. “By the time emergency services resuscitated him, his brain had been without oxygen for 15 to 20 minutes.” He suffered permanent brain damage, and is confined to a wheelchair. A lawsuit again alleged that the defendant bat manufacturer “knew the aluminum bat posed an unreasonable risk of harm because it did not allow Domalewski enough time to react to the hit ball.” The lawsuit was eventually settled for $14.5 million.

Little League responded to these concerns by increasing the maximum barrel width of aluminum bats to 2 5/8 inches, in order to reduce their “trampoline effect.” The new standard is effective as of January 1, 2018. But aluminum bats are still widely used because wooden bats break regularly, and are therefore more expensive. Players have also been injured by balls hit with wooden bats, although less frequently.

Consider a chest protector or “heart guard shirt” for pitchers. Steven Domalewski went into cardiac arrest because the ball hit him precisely between heartbeats, a condition called commotio cordis. No study has ever concluded that chest protectors decrease the chance of commotio cordis, but new technology may soon make this possible. And at least one parent believes that a “heart guard shirt” protected his son from being seriously injured when he was hit in the chest by a line drive while pitching. Chest protectors have also been endorsed by NOCSAE, which is developing the “first chest protector standard intended to significantly reduce the likelihood of sudden death from commotio cordis in baseball and lacrosse players.”

Mandate Defibrillators. Defibrillators are still the best way to resuscitate players affected by commotio cordis. They are mandatory at games and practices in New York City. An increasing number of leagues are also buying defibrillators, or having them donated by a local hospital.

Better protection from foul balls. Foul balls frequent exceed 100 mph, and can consequently cause severe injuries. In 2015, a Little League player sustained a severe brain injury when he was hit in the head with a foul ball. He recently won a $1.7 million verdict for his injuries. He was standing inside a first base dugout when he was injured. But he was nonetheless hit because there was an 11-foot gap between the backstop and dugout fences, in violation of Little League regulations.

Rule 1.08 of the Little League rule book bans having players “on deck” for this reason. “Players are not allowed to hold a bat in their hands until the umpire calls them to bat. They may take a couple of practice swings on their way to home plate.”

Breakaway bases. Rule 1.06 of the Little League rule book requires all leagues to “utilize bases that disengage their anchor.” Stationary bases cause thousands of injuries every year, especially fractures, dislocations, and sprains. Even major league baseball players are not immune.

Breakaway bases can substantially reduce the incidence and severity of injuries. ESPN Senior Writer Steve Wulf cited a two year study by Dr. David Janda of the Preventive Sports Medicine Institute which concluded that “breakaway bases reduced injuries by an astonishing 98 percent and health care costs by 99 percent. He concluded that the movable base could do for baseball injuries what the air bag did for automobile accidents.” The study was published in The Journal of the American Medical Association in 1988.

Breakaway bases are also supported by stalwart consumer and safety advocate Ralph Nader. He noted that after analyzing the Janda study, the Centers for Disease Control and Prevention (CDC) concluded that switching from stationary to breakaway bases would “prevent approximately 1.7 million injuries a year and save two billion dollars in associated health care costs a year nationally.” He also noted that the Consumer Product Safety Commission (CPSC) “concluded that breakaway bases could reduce base-contact sliding injuries in children’s organized play.”

Players of all ages should nonetheless be discouraged from sliding headfirst. A 2017 study published in The American Journal of Sports Medicine concluded that the incidence of injury is greater for head than feet first slides. The New York Times cited the study’s conclusion that “sliding injuries are nearly four times more likely to occur at second base than at other bases. And hands, fingers and thumbs, with their fine architecture, were approximately twice as likely to be injured as ankles and knees.” Although the study was limited to major league baseball players, it is likely that the same conclusions apply to players of all ages. A 2003 study published in The American Journal of Sports Medicine also concluded that sliding head first was not faster than sliding feet first.

Limit pitching. Too much pitching “(“overuse”) is still the biggest reason for arm injuries in baseball. That conclusion was supported by a five year study conducted by the Department of Exercise and Sport Science at the University of North Carolina. The study “also failed to show an increased risk of arm injury due to breaking pitches, such as curve balls.”

To address this problem, Little League has adopted a “Pitch Smart” program. The program provides guidelines about how much and often players of all ages should pitch. In 2006, Little League started a pitch count program. They have also issued a list of risk factors for injuries caused by too much pitching.

Following these simple rules will allow your child to stay safe while playing the classic American sport baseball.